Make Way Day is back, bigger and bolder and packing some muscle!

25 local authorities will support local disabilities groups as they hit the streets today with friendly reminders not to:
• Park on the footpath
• Forget your bins (or use illegal sandwich boards)
• Carelessly park bikes on the street 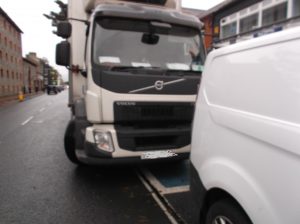 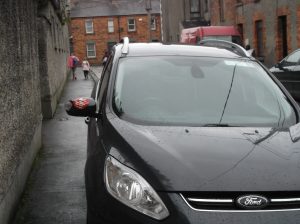 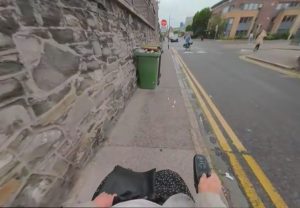 Now in year three of this award-winning campaign, DFI are delighted to have the backing of the Roads Policing unit of An Garda Síochána. “Someone in a powered wheelchair has to either go home or risk their lives on the public road to get around a parked vehicle on a path. Neither outcome is acceptable to the Gardaí,” said Assistant Commissioner for Roads Policing, Dave Sheahan.

Illustrating the Commissioner’s point is disability campaigner and UCC student Paul Cudmore. “My choices if a car blocks the footpath are stay stranded or try and get off it and into traffic. Either way I’m putting myself in danger having to use the road or tip out of my chair”, he said.

Robert – A crusader with secateurs in one hand, cane in the other.
“It’s not particularly nice when you get a briar (or other vegetation) in the face. For the sake of people like me, keep your hedges cut back.

Denise – “A street may look perfectly safe to you but it could be lethal for me due to issues I have with balance.

“Make Way Day is a chance for all of us to reflex on the needs of people with disabilities in our communities. The Garda Roads Division will increase their vigilance and lower their tolerance of footpath parking for all 365 days of the year in support of the campaign”, said Commissioner Sheahan.

“Our vision is an Ireland where it’s as socially unacceptable to park on the footpath as is it to smoke indoors,” said DFI spokesperson Clare Cronin. Once people are aware of the huge problems they cause people with disabilities, we find they’re willing to change. For the small minority who aren’t, there is the Gardaí and the local authorities”, she said.

Dublin City Council, DCC, are also taking a tougher stand on parking and A-Boards. New licensing laws for A-boards or sandwich boards inspired by Make Way Day came into force this September. DCC traffic division and the newly employed A-Board Inspectors will go out with some disability campaigners this Thursday to see problems first hand.

“We see the Make Way Day message reaching official Ireland as well as the thousands who join us on social media each year”, said Clare Cronin of DFI. “But of course our guerrilla sticker campaigners remain the heart and soul of Make Way Day”, she said.

On Thursday 26th, people who are frustrated, delayed and blocked all year go out with Make Way Day stickers. The low-adhesive stickers are friendly reminders to consider the needs of over 13% of the population have disabilities.

See www.makewayday.com for more including an updated list of events taking place.
The by-laws governing sandwich boards and other street furniture vary from area to area.