This name reflects the way polio survivors refer to themselves and indeed, has been used by us frequently in media and social media as a way of reminding the public: ‘We’re still here’. While ‘Post Polio Support Group’ will remain our official name, we believe that this simpler and clearer brand name can have a positive impact on our fundraising and promotional activities, giving us a clear, focused title, as a national polio organisation.

We have worked on creating a new logo to suit this new name and we are delighted to reveal it on the cover of ‘The Survivor’ magazine and on our homepage of our website, now called www.polio.ie.

The new logo and identity has been created by Geraldine Martin who worked on the production of our ‘How We Survived and Surprised’ book. The new look is inspired by a short story within that book, ‘Louis Heels’ by Anne Shanahan.

The footprints are leading away from polio and can suggest a long journey taken as survivors. They can also indicate how, despite their difficulties, Polio Survivors have made their mark, such as within their local community or society as a whole. One shoe is smaller than the other, a common experience for many children with polio. There are numerous interpretations. No doubt you as the polio survivor, will have your own. 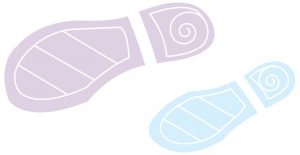 Do you have a story as a polio survivor that relates to the footprint?